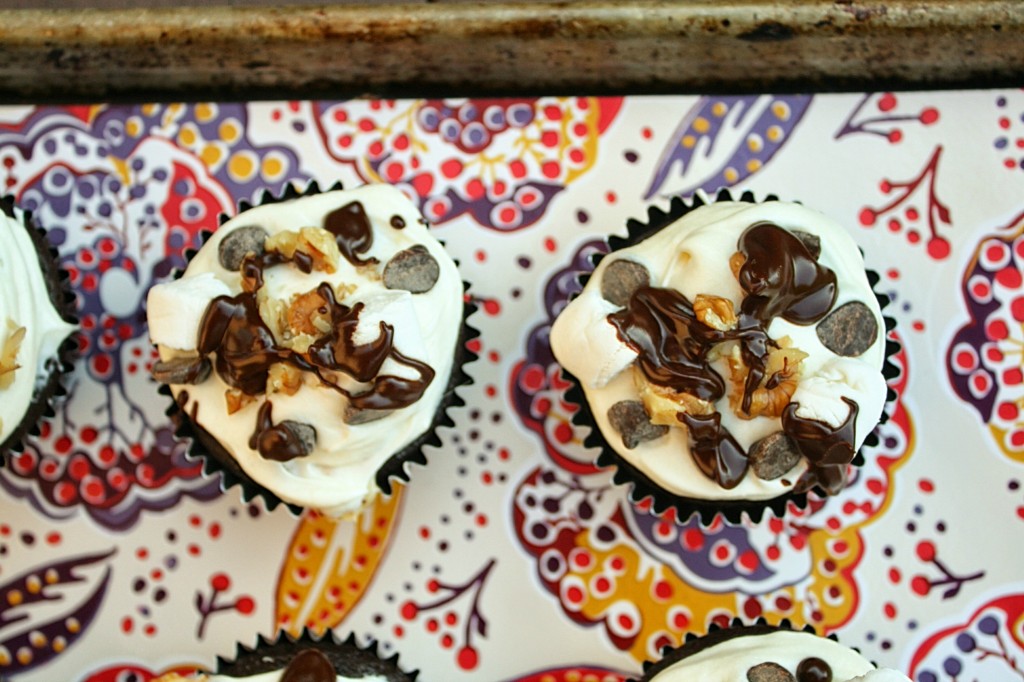 It’s been almost three years since I had marshmallows. Yes, I know Dandies and Sweet and Sara exist, but apparently no one in the entire city of Montreal was interested in them because they were NOWHERE to be found. Consequently, it became somewhat of a fixation for me leading to frantically checking every vaguely health-food orientated store I would come across and long sobs in the corner by myself. I’m pretty sure it’s why we moved. Praise the whatever-it-is that you praise because Toronto is hopping with gelatin-free marshmallows. I know some of you have really strong feelings on which brand you prefer, so just do what you like (Fresh Dandies are a drastically better bang for your buck, though).  I also have a container of Ricemellow Creme, which is in the frosting, but you can substitute for non-dairy cream cheese, if you don’t have access to it. And Marshmallow Gods, if you’re listening, please make those charming fruit flavoured marshmallows soon. 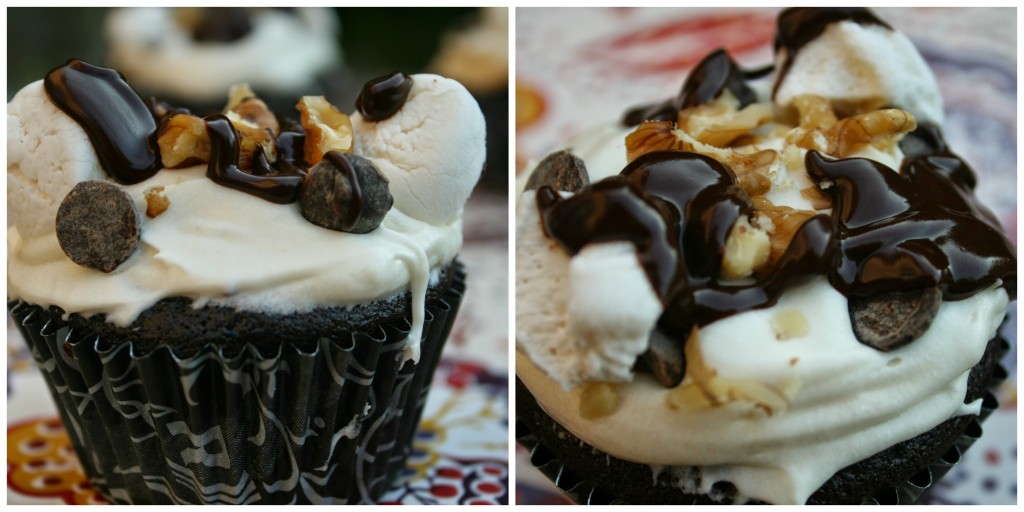 It’s my father-in-law’s birthday and these are for him! I’ve been told that he likes chocolate and I know he steals his wife’s walnuts, so this was an easy choice. Two of the people eating these are very allergic to walnuts, so for a little crunch on half the batch, I’m going to use brown rice krispies. This particular chocolate cake recipe is a genuine (don’t be fooled by some of the vegan ones that come up first in search results) Devil’s Food Cake, so it’s extra chocolately, moist and has plenty of air in the dough, which means light in texture, as all cupcakes need to be. From what I know, Devil’s Food Cake differs from ordinary chocolate cake in a few areas: It has some kind of hot liquid, it uses baking soda and it has more chocolate (sometimes it doubles up and uses cocoa and baking chocolate). This has a couple more steps and ingredients than that one basic chocolate cake recipe, but it’s definitely worth it and it’s still only uses one bowl! This cupcake melts in your mouth! In all it added about three minutes to my prep time. I implore you, use good coffee both in this recipe and in life. We don’t have enough time to waste on bad coffee, people.  I like using espresso in chocolate cakes, but I don’t have an espresso maker anymore since my leaky one didn’t make the cut to Ontario. 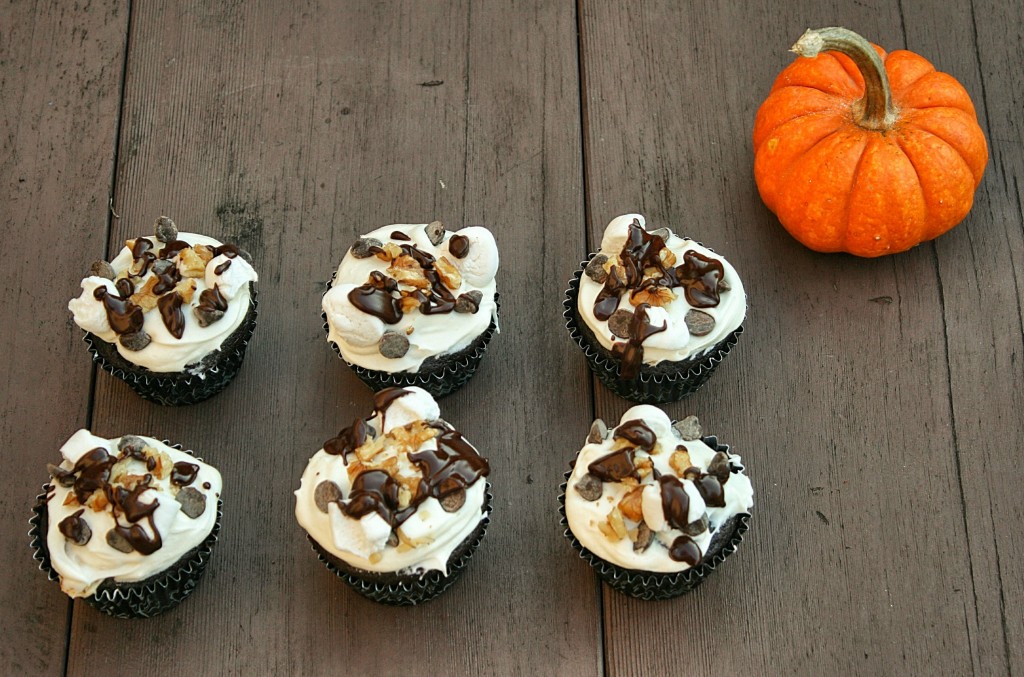 I have more time, a bigger kitchen and more mouths to subject to my experiments, so I’m expanding and experimenting with recipes that can be made both gluten-free and not, so hopefully we can include more people in our fun, allergy-friendly, fresh and exciting take on animal-free food! In case it’s your first time here, I don’t usually chat this much, but I’m sitting and waiting for something to cook, so I’m pulling a Lorelai Gilmore and practically talking your ear off. I’ll stop now. Oh, and make sure your marshmallow creme doesn’t have egg whites in it!

Preheat oven to 325 F. Place liners in cupcake tins. In a large bowl, thoroughly whisk together the dry ingredients. Add the remaining ingredients and mix until combined. The batter will be relatively thin, but it should look dark and make ripples when you lift some of it out. Fill each liner with about 2 tablespoons of batter and dot with the marshmallow. Bake for about 35 minutes, until the marshmallow has started to caramelize and the cake bounces back at your light touch. Cool on baking racks.

Using a hand, or stand (much easier), mixer whip the non-dairy margarine and the marshmallow creme for about 5 minutes, until very light and fluffy. Add the non-dairy cream cheese and continue to whip for an additional few minutes. Slowly add the about half the icing sugar and then the vanilla and non-dairy milk, followed by the rest of the icing sugar. Whip until smooth, light and fluffy – like a marshmallow.

Once the cupcakes have completely cooled, use a spatula or off-set spatula to spread the marshmallow frosting over them. Dot with with chocolate chips, walnuts or rice krispies and marshmallows. Drizzle with chocolate glaze, if using. 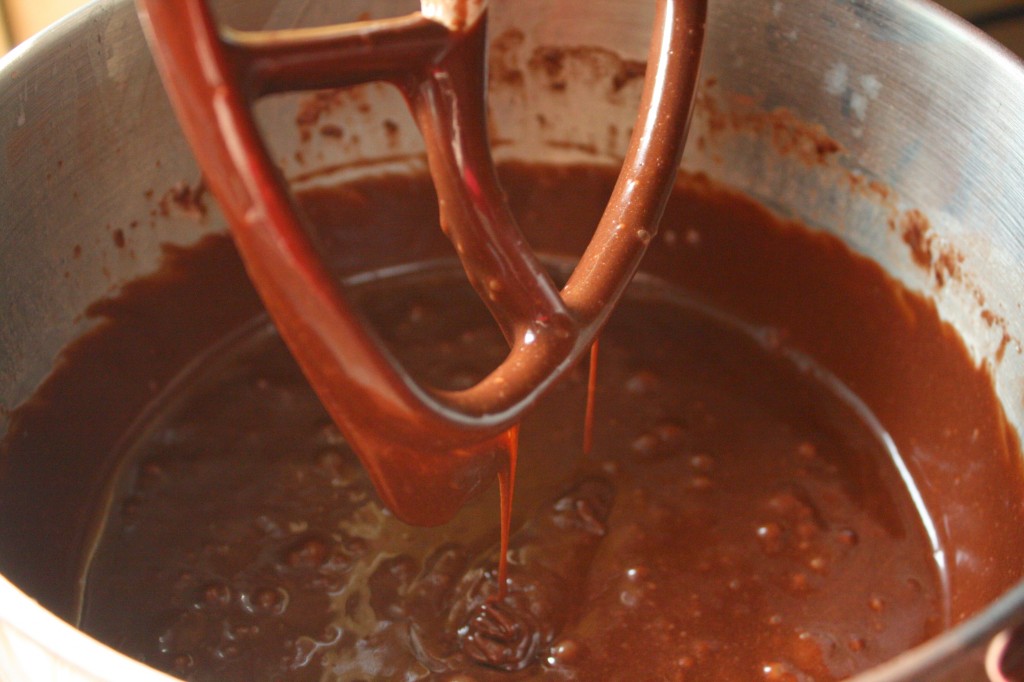 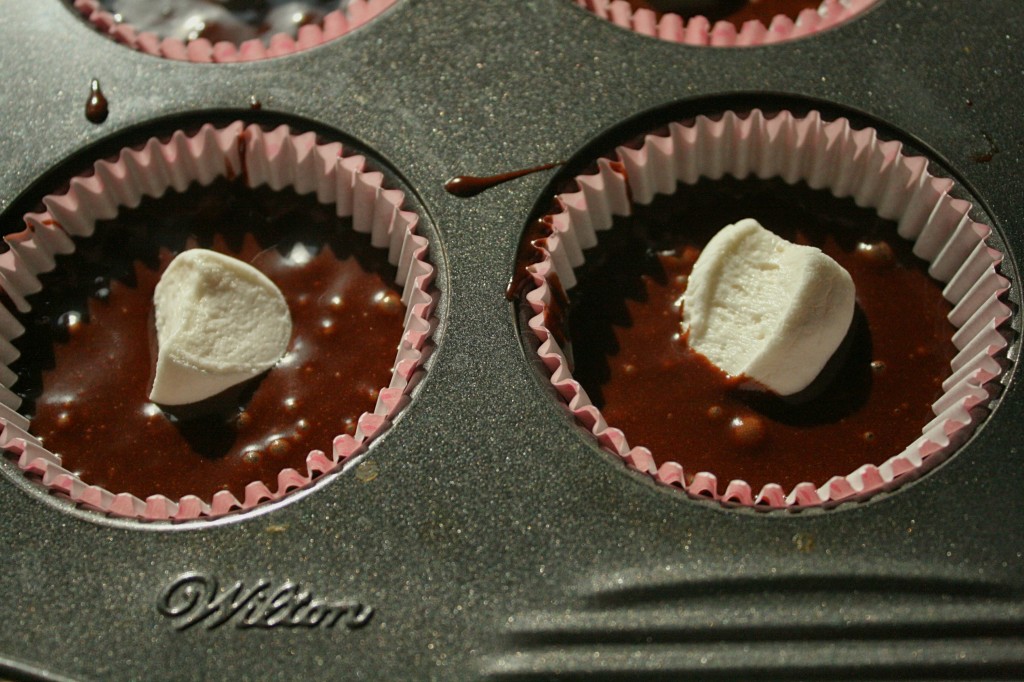 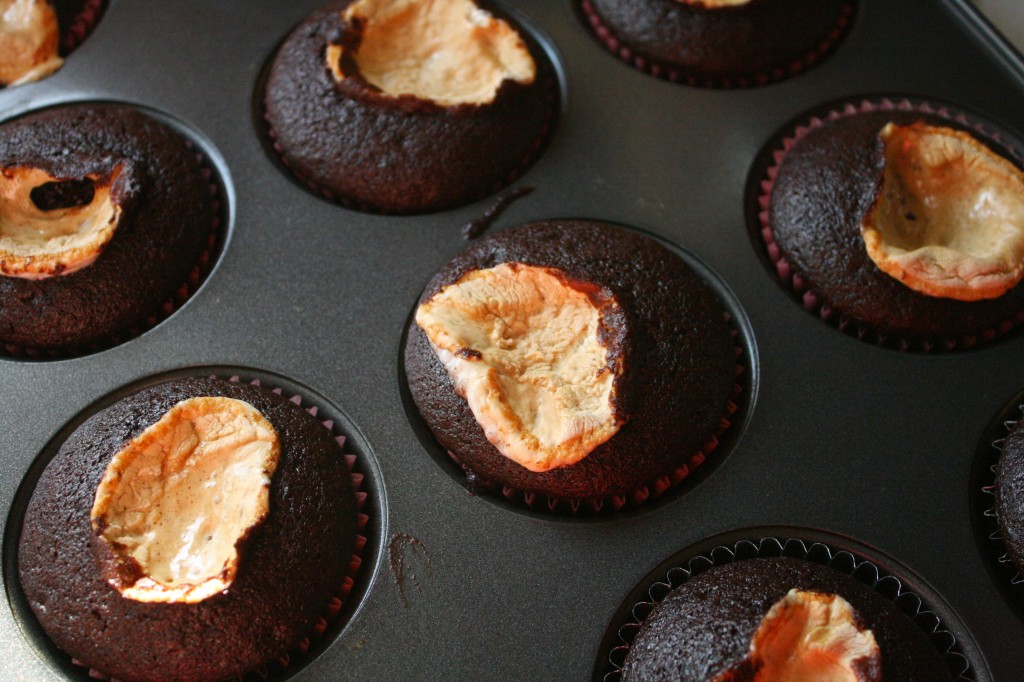 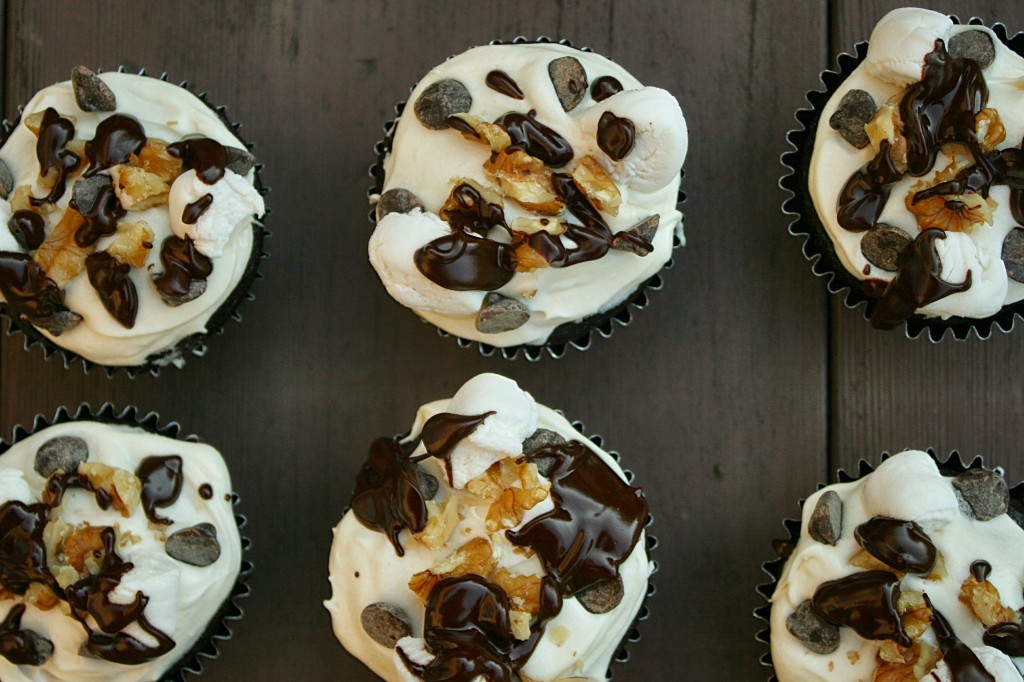