I have to admit, doing two Thanksgiving dinners in a row meant that I was doing a lot of stuff, in a very short period of time. That means that it’s been a little difficult to separate it all and decide what to blog together, and what deserved its own post. In the end, despite the fact that I only got one good picture of the stuffing alone, it was so good, the question answered itself. When you’re preparing for a holiday, make the cornbread first because it needs the time to get a little stale, as that makes for the best stuffing.  My mother made the most delicious bread stuffing, but I’ve never been able to recreate that, so I’ve made my mark with cornbread stuffing – and although it’s different, it’s just as good. Maybe that’s the key to having successful, adult holiday dinners: recreate the heirloom recipes, but leave your own mark on what you can. Though I guess making your holiday dinners vegan is leaving your own reduced-cruelty mark and what could be better than that? 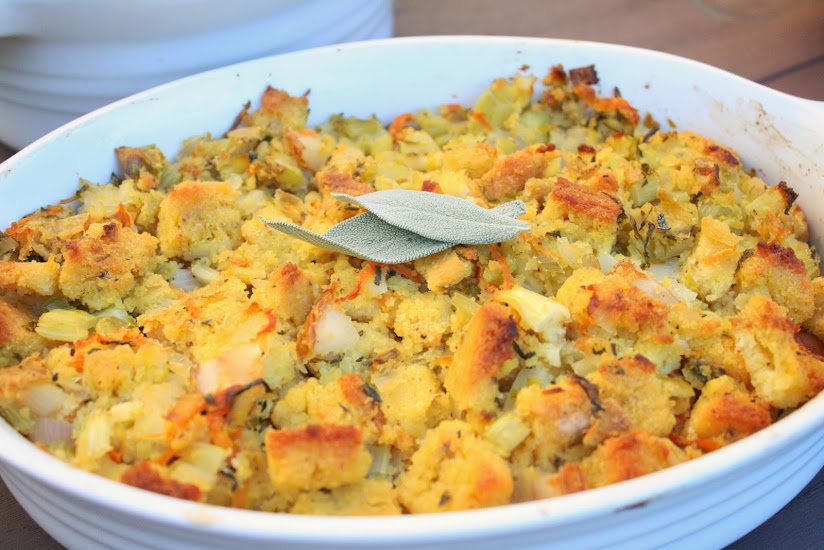 This recipe serves about four, but it’s easily doubled, as the dressing recipe only uses half the cornbread. This all works as a non gluten-free dish, even the cornbread recipe. I strive to make sure anyone can make my food and if I think perhaps it won’t work, I’ll always mention it.

In a small mixing bowl, whisk together the cornmeal and non-dairy milk and let sit for 5 minutes. Grease 9 x 13 pan.  In the meantime, preheat oven to 400 F. In a large mixing bowl, whisk together the flour, sugar, salt and herbs. Make a hole in the middle of the dry ingredients and add the soaked cornmeal, egg replacer, vinegar and oil and beat until smooth. Pour into greased baking dish. Bake for 35 to 40 minutes, until the edges are golden brown and a toothpick inserted in the middle comes out clean. Let cool in the pan, on a baking rack.

In a large skillet, heat the non-dairy margarine and oil over medium heat. Once the margarine has melted, add the onion and celery, sprinkle with salt and sautee until translucent. Add the apple, seasonings and nutritional yeast and stir to combine. Take off heat, add the cornbread cubes and parsley and stir to combine. Add the stock, a little bit at a time, until the mixture is moistened, but not too wet. Season with salt and pepper and transfer anything you don’t need to stuff into something to a greased oven proof dish. When you’re ready to bake it, preheat oven to 350 F. Bake, uncovered, for about half an hour, but the time isn’t strict, as you just want a little golden brown colour on top. 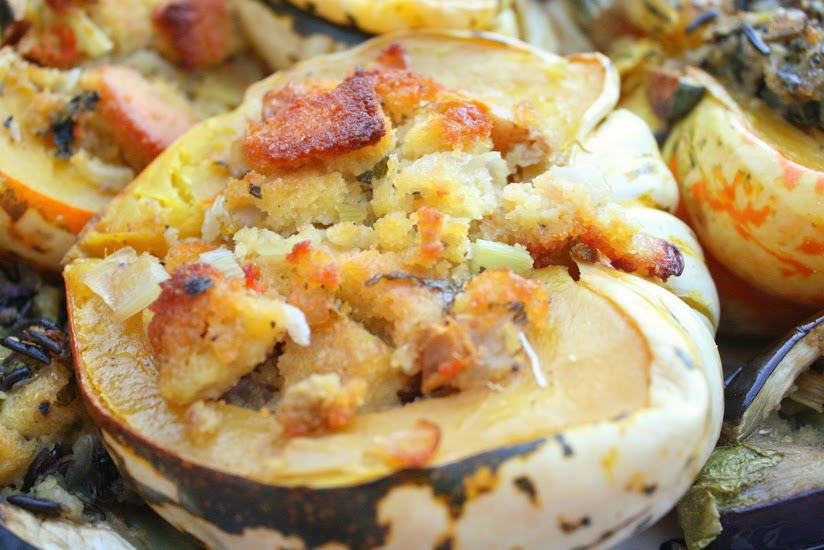