What a vegetable! My first experience with eggplant was a life-changing one (no joke) but I’m saving that recipe and story for its own post (here) later this week. They say the true test of a chef’s ability is the way they cook eggplant – and oh boy, if you’ve ever had bad, bitter, tough eggplant, you know why they say that.

There are plenty of applications for eggplant, but they’re not all with eggplant as the main star, so I’ve kept the spotlight to one simple roasted version that is my favourite. I have two more recipes planned for this week: my favourite burrito and that special one mentioned above. On to today, though! I love a bit of roasted eggplant and there are just a few steps you can take to ensure your eggplant turns out delicious.

1. Pick a good eggplant: No matter what variety you chose, make sure it is hard to your touch. If the eggplants at the store are at all soft, leave it behind for another time. The soft ones will be full of bitterness, even if you do all the other steps correctly. Cutting the eggplant should sound as though you are slicing a crisp apple.

2. Salt the eggplant before cooking; both sides. I like to leave the skin on, chop them, lay them flat, salt, flip and salt again. The salting step also helps reduce the amount of oil the eggplant soaks up in cooking.

3. Be generous with the oil. This means using a nice tasting, high quality olive oil (or whatever taste nice to you, really). Keep an eye on the eggplant and add more during cooking, if it looks like it’s drying out.

Roasted Eggplant with Fennel Seeds
Serves 2, as a side

Slice eggplant and salt. Preheat oven to 375 F. Line a small baking sheet with parchment paper and drizzle olive oil on it. Sprinkle the fennel seeds evenly over the oil. Lay the eggplant slices out flat and sprinkle them with the basil. Drizzle the remaining oil as evenly as you can over the eggplant slices. Roast for ten minutes on one side, flip and roast for an additional 15 minutes, or until the eggplant has softened and begun to brown. Serve hot, on the side of whatever you like or in a sandwich.

Note: You might consider throwing some sliced zucchini and onions on to the baking sheet with the eggplant. Dream combination! 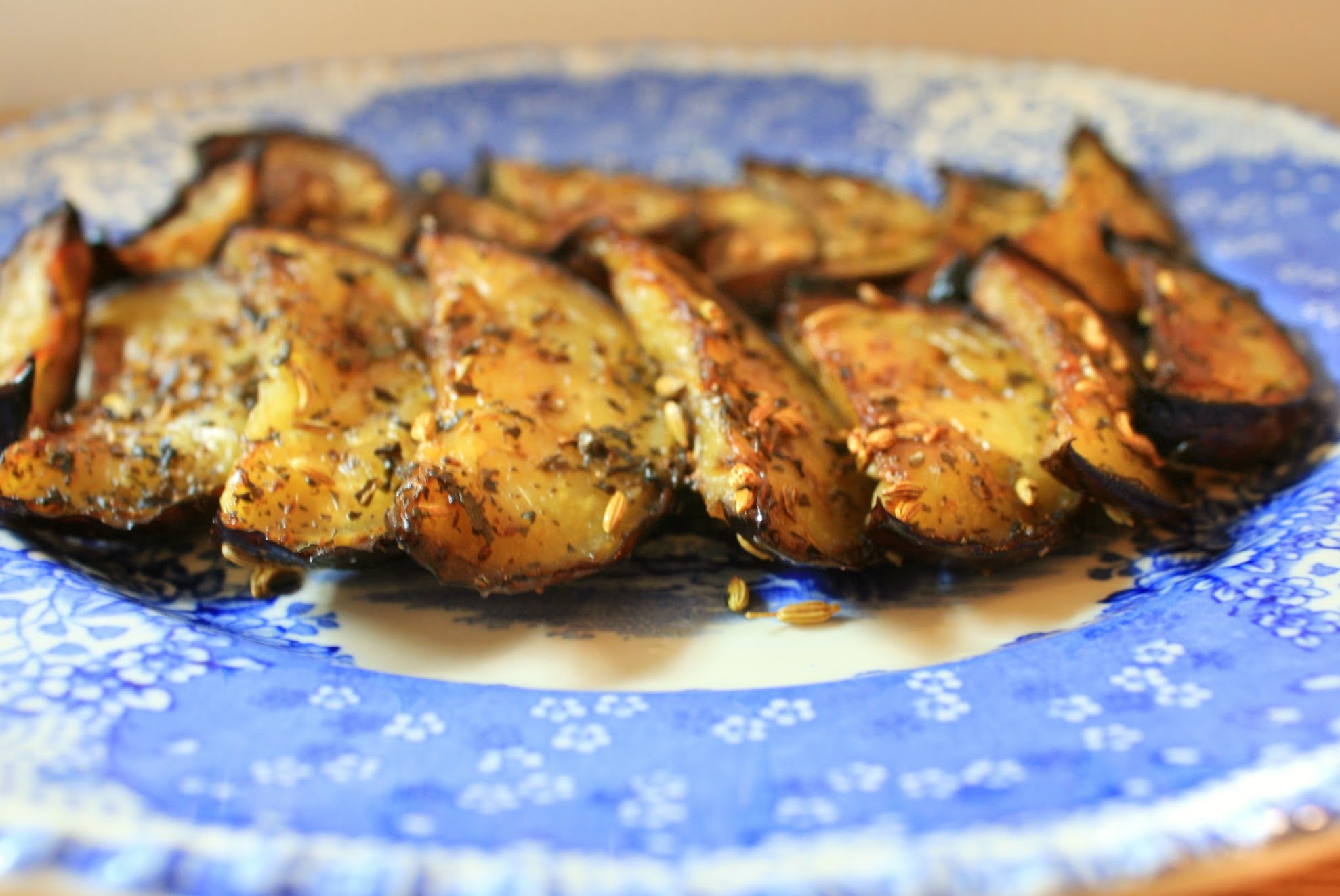 Some of my other favourite things to do with eggplant include:

1) Thinly sliced and sauteed and then right on top of the pizza sauce on a cheeseless pizza. It’s so creamy, it takes the place of vegan cheese. If I can’t find good eggplant, I simply skip making pizza. I ended up making it just after this post because I couldn’t stop thinking about it (Here).

2) Diced, sauteed in olive oil with garlic and in marinara. It adds volume to any tomato based pasta sauce.

3) Vegan YumYum’s gorgeous starter, Minature Napoleons. I made these for my husband when we first started dating. Too bad he had no idea he is allergic to most of the ingredients.

4) Ratatouille, of course, if all the ingredients are very, very fresh. Maybe even my Ratatouille Pizza.

5) Sliced into thick rounds, salted and then grilled on the barbecue.